This is aging like fine wine. Please remember this for the future.

No one really knows what Russia is trying to do at this point. They could just be holding a knife to Ukraine’s neck to get more concessions. Or maybe Russia wants a larger slice off eastern Ukraine. But they are absolutely in position to attack.

English language media induces some level of doubt, but Russia has been pretty clear about what the stakes are. Ukraine needs to respect the autonomy that Eastern Russian-speaking territories have demanded, and that the Ukrainian government has agreed to. Unlike the previous situation in Crimea, the Russian government does not take this lightly, even though the current situation isn’t new or seeing particular developments.

Unlike the previous situation in Crimea? They took it by military force. The same playbook is going on here, with the Russian government currently moving to recognize the Donbass region as independent. To justify that, there was a supposed IED found that clearly was a false flag operation. Putin immediately started blabbering about “genocide”. I find it hard to see this as anything other than trying to rile up the people in the region who consume a lot of Russian-language media that will be echoing Putin’s words.

Right, in Crimea Russia took advantage of a moment of weakness when nationalists staged a coup and moved in. Now that things have stabilized over the past few years, they are giving a clear warning to the current government rather than simply moving in and taking territory as they wish. A clear component of this is that increased autonomy for the region was supposed to be recognized in 2015, so there was at least there has been an attempt to settle this diplomatically, although the Ukrainian government arguably hasn’t held up its end of the deal.

I’m not familiar with the IED story, but there has been a high level of aggression from the Ukrainian government toward the region in question since 2015 which has further increased recently. These incidents have majorly increased in the last month which is the real start of the issue, and Russia’s response is step 2.

This isn’t to say that Putin’s motives are entirely pure, but I’d never expect him to pass on the opportunity to generate nationalistic enthusiasm among his base of support by moving to defend ethnic Russians against Ukraine. The territory would be particularly strategic for them too, so once again opportunity knocks from their point of view. “Genocide” is a stretch, but it’s closer to that than is talked about in English language media, and it plays well to rile up people there and back home.

The U.S. intelligence briefing included specific reference to next Wednesday, February 16, as a start date for the ground invasion, three officials — based in Washington, London and Ukraine — told POLITICO.

It seems that all of Ukraine slept through the attack. Or maybe they were referring to Feburary 16, 2023.

That more or less echoes what I just said. It’s really hard to tell from the outside what Russia is planning. It has, however, already started with a litany of cyberattacks on Ukrainian civilian and military targets.

So Russia overslept its own invasion date? Which it helpfully told to western officials beforehand?

Its not so hard to tell what Russia is planning if you follow Russian news. For one thing, they certainly dont plan an invasion of Ukraine, because there is absolutely nothing of value left after 8 years of mismanagement by the coup regime. Most of the industry was dismantled, and most skilled people left the country. Now there is only corruption.

So Russia overslept its own invasion date? Which it helpfully told to western officials beforehand?

Again, this is all Western countries and Ukraine trying to read Russian intentions from troop build ups, an increase in cyber attacks, shaky intelligence, etc. Exactly no one is saying that Russia is absolutely going to invade in full force. They are saying Russia is putting itself in the position to do so. It looks like this is partially to avoid getting into any sticky spots with their own citizens being stuck in the middle of a Russian invasion.

Most of the industry was dismantled, and most skilled people left the country.

There’s a constant war with separatists and Russian invaders that’s draining the country. There’s also corruption, but that’s been endemic for decades. So yes, there is a problem with a brain drain. I’m not exactly sure what you mean by industry being dismantled. GDP is recovering after a sharp dip after 2013, but still not back to its height.

Exactly, shaky intelligence. I would even say lies, because nothing they say has any relation with reality. Russia is not the one who starts wars, but the one who ends them. And the Russian government keeps repeating day after day that they wont invade Ukraine. They are a million times more trustworthy than the war criminals in Washington or London.

There are no Russian invaders. If you think otherwise, show me a single picture of a Donbass soldier with Russian insignias. Ukraine lost at least 10 million people (20% of the population) since the collapse of the USSR. And there hasnt been a proper census in years, so in reality its probably much lower. The only reason the country hasnt collapsed is because western countries are pumping in billions of us dollars.

Russia soldiers without insignia have invaded and fought in Ukraine before under the direction of the Kremlin. These were the infamous “little green men” who occupied Crimea. Russia originally denied their involvement, only acknowledging them after Crimea had been fully taken. There’s every reason to think that Russian backed separatists in the Donbass region are likely getting the same sort of help.

Ukraine is losing population, yes. The problem is that, as you can see from your graph, it has been doing so across every government. The post-Euromaiden protests government is far from special in this regard. In fact, the only difference it has from previous governments is that it had a slice of its land cut off by Russia, so in that sense it “lost” extra population.

At least try to make it believable when you make things up. It is true that Russian soldiers came to Crimea, to ensure the safety of the referendum. Most of the population welcomed the soldiers, and even most Ukrainian soldiers ended up switching sides and joining the Russian army.

It is absolute nonsense to call that an invasion, and they were certainly not involved in any fighting.

As for Donbass, Russia can easily obliterate all Ukrainian units in the region using artillery and air strikes, no need to move a single soldier over the border.

What I find curious is that you dont have any problem at all with NATO troops going to Ukraine, and teaching their military how to fight Russia. Is that what you call peaceful behaviour?

It did? I’m still waiting here.

They’ve been predicting it since 2016. 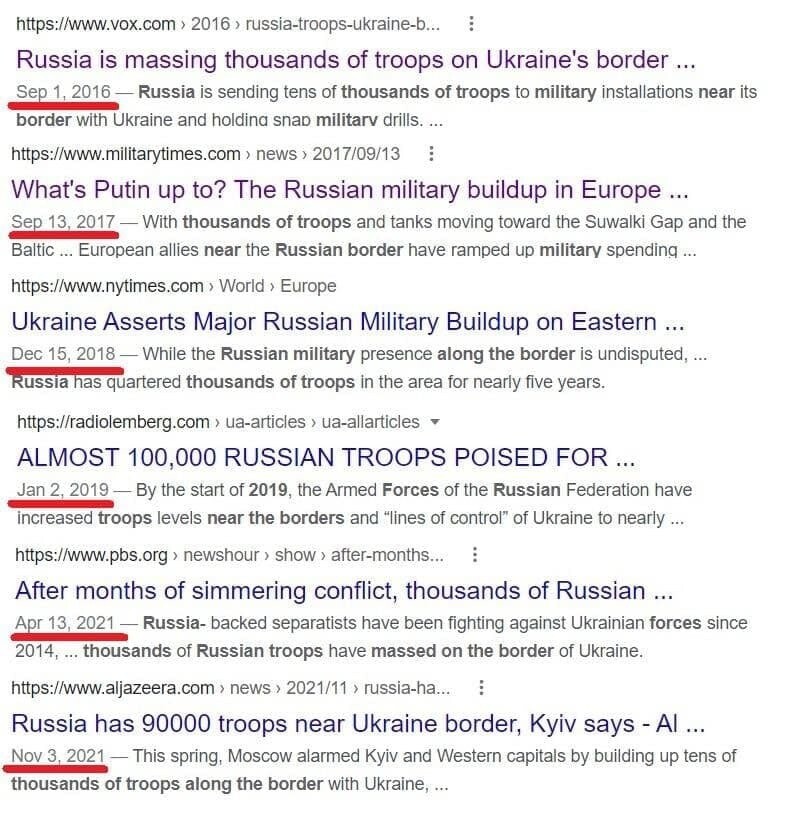 This is some doomsday prediction shit. “Wrong? Just push the date back!”

but reports of Russian troops aren’t the same as a prediction of invasion.

It’s the obvious implication, otherwise why report the troops at all?

What’s the story exactly, that Russia has and army and a border with Ukraine?

No, that there a lot of russian troops near the border

The rest of the year, I would assume. I don’t see why this is so hard to understand.

Sounds like the stories did their job convincing you that there is some significant build up of troops compared to the rest of the year. You just assume that to be the case without actually knowing.

I mean ofc, I haven’t read the articles since you sent an image instead of a link, but I don’t see how that’s relevant.

I didn’t send you any images, you’re confusing me with somebody else here?

However, the fact that you haven’t even read any of the articles you’re referring to further demonstrates that you argue from position of ignorance.

Oh whoops, that was agreeable landscape. Anyway, it’s not a position of ignorance because I’m not arguing about the actual issue in those articles, just that they exist.

I’m arguing they saw something they could report as noteworthy. Anyway, I’m not arguing anything any longer. Every time I explain something, you hound me with some other thing to bring me down. This is not good faith.